How excited are we for our Go See's Galore Blog spot featuring: The King of high heels himself, the dynamic and talented Jorge Gonzalez.

Hola Chichas y Chichos, don’t touch my shoes and walk chichas! Are just a few of the fabulous catch phrases our feature says in a 2 minute time frame. Cuban born, now dominating the cruel world of fashion, Jorge, Mr. Gonzalez, if you're nasty, who we all know as the deliciously comedic walking coach on Heidi Klum’s Germany’s Next Top Model, knows just about everything about high heels and how to, “walk chichas”.

For those of you who don’t know him. He was Heidi Klum's answer to Miss. Jay (Jay Alexander), on America’s Next Top Model. He has done for the German fashion scene what Christian Louboutin has done for the stiletto.

That may be taking it too far, yet, the impression he has made in Germany, is that as lame and scripted as reality TV may be, there is a certain realness to many of reality TVs protagonists, a certain je ne sais quoi. In fact having talents such as Mr. Gonzalez on network television, shows just how diverse and accepting German television has actually become. German youth no longer have to look up to the American superstars. They have stars of their own. A diverse melting pot of characters whom they can admire and aspire to be.


Don’t get it twisted. Jorge Gonzalez is not your average fame whore. He’s got a good head on his shoulders as well as a good head of hair [I might add]. Not for nothing, he also has a degree in Nuclear Ecology.

Listen up while we get to know why this Cuban native left his homeland, what’s hot and what’s not and most importantly, how to walk a day in his shoes.

Finally it's Freaking Friday, lets get on with it!

I’m sure this is the 9,999th time that someone has asked you to explain what you studied before becoming a world-renowned catwalk diva--But please explain how a fabulous fashionable person like yourself would be interested in a degree in Nuclear Ecology? I’m still trying to imagine you in that awful white smock-frock.

I was always interested in science since I was a young boy and in school I was naturally very good in subjects such as biology and chemistry. I always wanted to travel and see the world and the only decent way to leave Cuba was to study abroad. The only way to study in Europe where I always wanted to go was to be one of the best in school. So from early on I worked hard at school and always got the best grades. When I checked the list of possible countries I decided for the home of my grandmother's favorite author Kafka: Chechsolowakia. I wanted to experience the culture which I only had read about in person. And only then it was that I saw the list of disciplines that were on offer. The only open spot was nuclear ecology and so I decided to study it and finished after the fall of the iron curtain with my diploma.

Parallel to my studies fashion was always of great interest to me and became a hobby of mine. Eventually I developed my skills from being a model to being a choreographer, catwalk trainer an finally a designer.

Jordan: As I see it, you pretty much brought the artistry of catwalk to Germany. You found a
niche in the industry that was missing. How did the idea come about? More importantly, how did you learn how to strut the catwalk? I've seen some horribly choreographed fashion shows here with spinning and twirling. They definitely need a crash course in runway etiquette.

When I was choreographing a fashion show in Prague I included a dance part and the girls complained about the high heels, which they felt they couldn't work with. I thought to myself "this cannot be so difficult". And since I had trained to walk in my grandmother's high heels, since my early childhood, I put some high heels on and showed the models how to walk and how to dance in them. And then the 'Chicas Walk' was born. 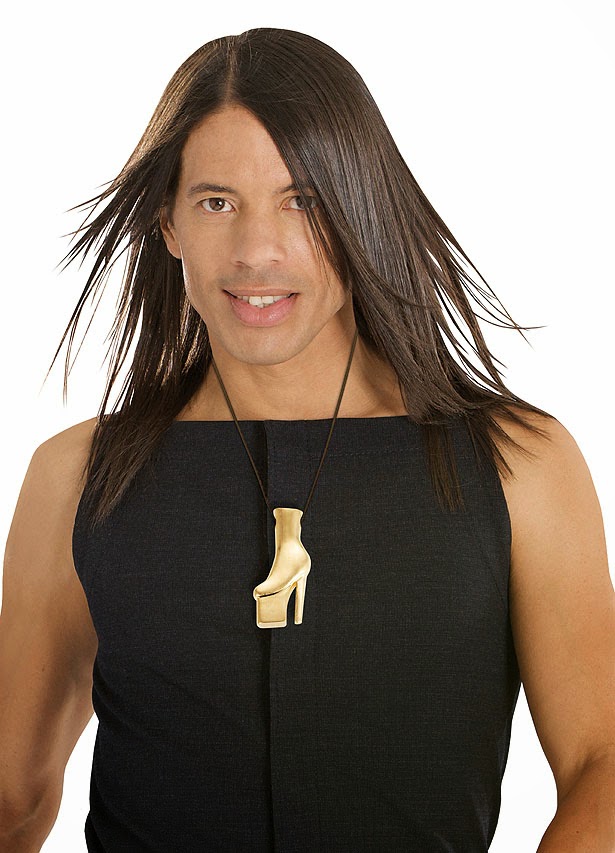 Jordan: Who would win in a catwalk battle between Ru Paul and J Alexander (Miss J)? who was your protege?

Jorge:
Ru Paul, he's the one and only original. Sorry, Miss J.

Jordan: The element that bothers me about a lot of the model and fashion reality TV shows, is that they don’t teach the girls the reality of the business. A lot of these girls graduate from the school of fashion--go out into the real industry and are disheartened by the (real) reality. The waiting, the endless rejection, the living out of a suitcase and being away from your friends and family, the shoes that are 2 sizes too small. There are endless aspects of the industry you just can’t teach. These girls come backstage at a show or on set and have a rude awakening. How was your experience on Germany’s Next Top Model?

Jorge:
At the end of the day a TV show is what it is: a TV show. It only can include a certain portion of reality since in reality you do not have a camera following you 24/7. They did a pretty good job though creating challenges that reflect parts of the real model world. Again, it is a casting show-- not a real model job. All judges and Heidi Klum herself have brought a lot of useful knowledge into the show which the contestants could learn and benefit from. I personally have also always tried to keep my training as relevant for the real model life as possible.

Jordan: Bethann Hardisson, together with Naomi Campbell and famed fashion model Iman, recently spoke out against racism in the fashion industry. They were even brave enough to form the Diversity Coalition, which released a list of shame--detailing the designers who don’t book models-of-color. Do you think there needs to be more diversity on the runway?

Jorge:
Yes, the world's societies become more diverse every day and this should reflect on the world of runways as well. However, I would not go as far as forcing designers to do something like booking models who they don't see representing their fashion - no matter what color they're of. Peace and freedom rather than political dogmatism - also in the world of beauty and fashion.

Jordan: It’s getting a bit hot in here. While we’re on the subject of color. You’re quite a colorful character with a quirky and in-your-face sense of humor. German’s can be quite serious and reserved. How do you remain ‘yourself’ without offending people?

Jorge:
Opposite attracts. Authenticity is the key here. I am what and who I am and I am aware that I do polarize the way I am. Most people can deal with it so far.

Jordan: The stereotypical image of German fashion--unfashionable Birkenstock and Socks—camera toting tourist chic types. What would you say to someone who said that Germans have bad sense of style? I think you've done a good job of falsifying that stereotype. I mean Karl Lagerfeld is the Godfather of Fashion--he’s German.

You can not generalize this at all. Do Americans have style? Or the British? It depends on who you look at and what you're judging. In no country is everyone a Fashionista. But in general I would still say the Germans build great cars and some good fashion and actually have got a good portion of style. 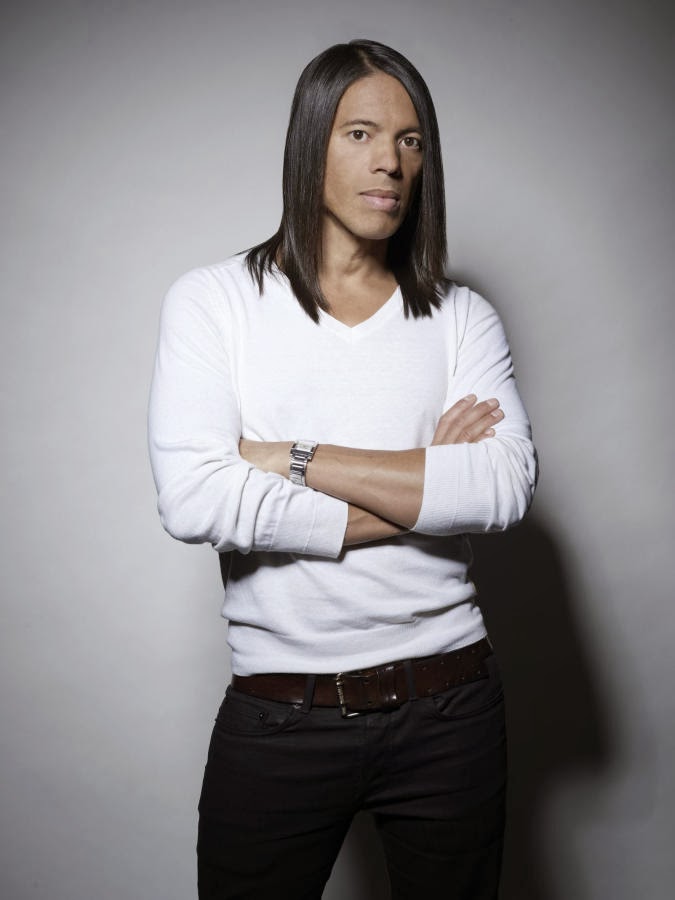 Blue Nail Polish?
"Ain't nobody got time for that."

Miley Cyrus?
"Ain't nobody got time for that."

Matching your eye shadow and shirt?
"Ain't nobody got time for that."

Neon Colors?
"Ain't nobody got time for that."

Side Cleavage?
"Ain't nobody got time for that."

Smokey Eyes?
"Count me in."

Nerd Glasses?
"Ain't nobody got time for that."

Shaving off one side of your hair?
"Ain't nobody got time for that."

Copying someone else's style?
"Ain't nobody got time for that."

Chanel short suits?
"Count me in."

Vajazzaling /The art of bedazzaling your vah jay jay)?
"Ain't nobody got time for that."

Jordan: You're working on a new project right?

What's it all about? Give us some dirt por favor.

Well, E! Entertainment asked me to put on a fashion talk show which contains elements of Red Carpet criticism as well as constructive styling and fashion tips for stars and everyone. So my team and I together with the director of programming and developed a show totally around stars and fashion. It is all about the "E! FACTOR" who's got it and who has not. The inner and authentic glam that exists in each and every person just not only get revealed. We have elements like the "Inspeccion", the "Reconstruction" and the part "Bitch you stole my look"! And in each show we feature a German celebrity and one or more independent designers.

Jordan: If you had a band following you. Every time you walk into the room and they play a song. Your song. Which song would they play? Mine is, "Black Betty" by Ram Jam. I'm sure yours would be--Scandalous?

Jordan: PLUG..but cute. Finally, what does it for you on a Friday? 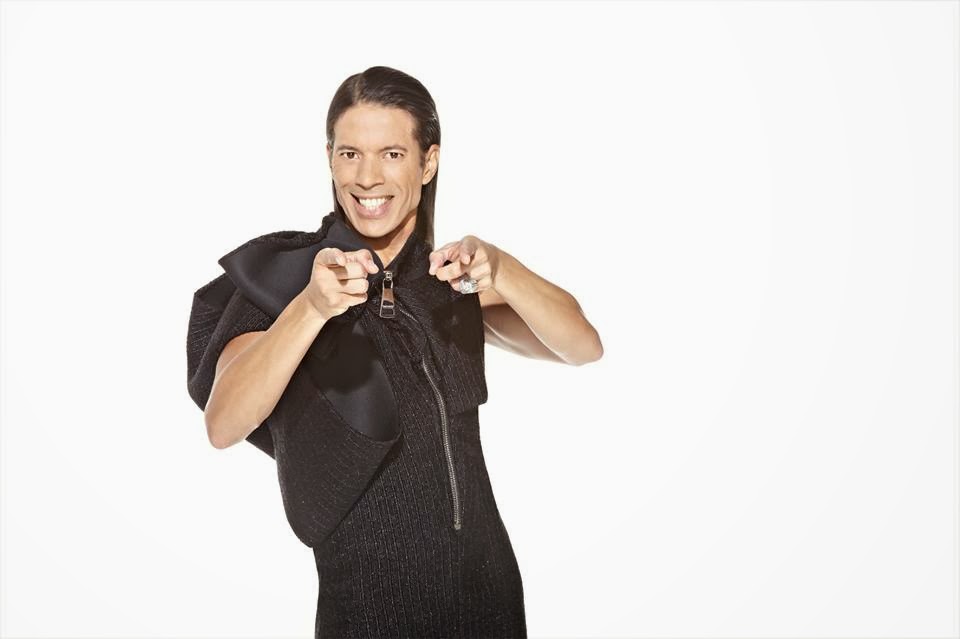 When you get that feeling that it’s the weekend and you’re gonna have a good time.

Obviously mine is taking 'Selfies', dancing around in my knickers while I put on my face and hum out of pitch tunes, which only dogs can hear. .What’s yours?

Jorge:
"Actually, I am living every day as if it was Friday. No matter how much I work I try to enjoy the ride as much as I can."

Jordan: It was so nice to get to know a little more about you. Nice to meet you. I hope to see you around the world. Is there anything left that we haven't robbed you of that you'd like to tell viewers, fans or FB stalkers?

Jorge:
"Remember: The way you walk you go through life!"


"E! FACTOR by Jorge González" starts on 28.10.2013 exclusively on E! Entertainment. Check
him out and whatever you do, Don’t touch his shoes.”
Posted by Catchup Productions at 9:16:00 AM

Catchup Productions
Zurich, Switzerland
We're a boutique multi-media full-service production company, based in Switzerland, offering services worldwide. Collectively, we have over a decade of experience in the fields of Fashion and Media. We tailor-make packages to fit your company's needs and brand, offering a young, fresh, out-of-the-box prospective. We are dedicated to realizing our clients ideas and seeing them through. We believe that Fashion is not only for creative minded people: Fashion is a part of life and individuality. We strive to achieve modernity, minimalism and a fresh outlook in each and every project. We fine-comb every model casting, location scout and concept from start to finish. Our goal is to seamlessly connect fashion and enterprise. We welcome you to our blog where we will announce our upcoming projects and latest news. "A hurdle can be either an obstacle or an opportunity" - Lolo Jones, 2012 Team USA Olympic Athlete